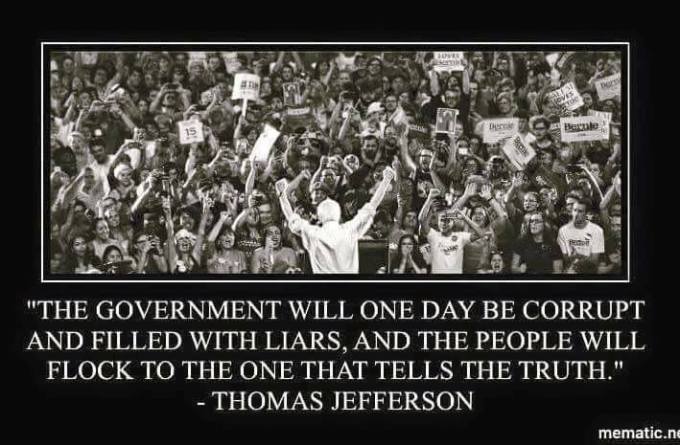 It is, perhaps, an exercise in futility to put forth a pragmatic plan that can begin to begin to deal with our present crisis.

The media is owned by the 1% and continually colludes with the Military Industrial Complex to hide the truth about the state of the nation and the world from the American people. the Democratic Party is so corrupt it would rather artificially prop up a sexual predator, whose nepotism and corruption are well documented and who continually lies about his history of regressive, pro-corporate legislation. Nevertheless, Bernie Sanders put forward a six-point plan to deal with the crisis. NOW.

I am no Bernie Bro; in fact, there are no “Bernie Bros”—it is a false narrative invented to discredit the men and women of all ages and races who have responded to Sanders’ call for radical reform of the American economy.

Nor is Sanders himself above criticism by his followers. Bernie Sanders  refuses to tell the truth about his “Good Friend” Joe Biden—aka Creepy Joe, Dementia Joe, Nepotism Joe, HSBC Joe, etc.—or call out the egregious hacking of the primaries that have been proved by the hard facts of raw exit poll data.

There is evidence to show that as much as 13% of the primary results were electronically transferred from Sanders to his crooked “Good Friend” and this doesn’t take into account various other DNC dirty tricks, such as closing or moving polling stations without warning, putting defective machines in others, magically unregistering progressive democrats from the rolls on primary day, etc., etc.

But the stark truth is that all the alternatives to Sanders available right now are much, much worse. Forty years of trickle down economics, combined with a medical crisis that political hacks of both parties have known was coming for years, have put our Nation–and the World–on the brink of the Abyss.

Bernie Sanders, like the mythic Greek hero Sisyphus, keeps rolling the ponderous stone of reform up the mountain of corruption that is modern American politics. It may seem absurd to even attempt to right the wrongs of forty years of the “NEO” con-job foisted on us by the pseudo-right and the pseudo-left, so far down the wrong path have they led us. Yet Sanders still endures. And make no mistake, Sanders has made tactical and strategic mistakes, have trusted in bad advice from persons who were, at best, fifth columnists, and has put personal loyalties to former colleagues above his duty to the people of his movement and the people of this nation, all with tragic consequences.

Right now we, as a nation, face total system collapse not only due to the present pandemic and ensuing economic meltdown that will surely follow, but even due even to a Corporatist political establishment that continues to play the same old political con game with am American public rapidly running out of options or patience.

In the face of this immanent crisis, as Cheeto Man lies, bullies and blusters his way through daily press briefings, and Creepy Uncle Joe displays his advanced dementia and incapacity to lead in video after pathetic video interviews from home, Bernie Sanders despite being cheated, shunned and disrespected by the Corporate Media and the party that used to be for the people, has put forth a six-point program that is pragmatic and achievable within months of it being implemented.

Though we know it may well be futile, we owe it to our neighbors, our fellow citizens and the nation to show them a way forward, for certainly the Corporate Media and the oligarchs that pay them to lie to us will continue to ignore Sanders and his solutions to the mess they created.

Here, is what Bernie Sanders has proposed, to deal with the crisis:

1. Addressing the Employment Crisis and Providing Immediate Financial Relief
There is little doubt in my mind that we are facing an economic crisis that could be even worse than the Great Depression. The St. Louis Federal Reserve has projected that 47 million more people may become unemployed by the end of June, with unemployment reaching 32 percent. In my view, we must make sure that every worker in America continues to receive their paycheck during this crisis and we must provide immediate financial relief to everyone in this country.
An important precedent for that approach was taken in the recent stimulus package in which grants were provided to the airlines for the sole purpose of maintaining the paychecks and benefits of some 2 million workers in that industry through September 30. We must expand that program to cover every worker in America and we must make it retroactive to the beginning of this crisis. This is not a radical idea. Other countries, such as the UK, Norway, Denmark, France, and others have all come up with similar approaches to sustain their economy and prevent workers from losing their jobs.
Our primary goal during this crisis must be to prevent the disintegration of the American economy. It will be much easier and less expensive to prevent the collapse of the economy than trying to put it back together after it collapses.
To do this, we must also begin monthly payments of $2,000 for every man, woman, and child in our country, and guarantee paid family leave throughout this crisis so that people who are sick do not face the choice of infecting others or losing their job.

2. We Must Guarantee Health Care to All
Let’s be clear: we were facing a catastrophic health care crisis before the pandemic, and now that crisis has become much, much worse. Already, 87 million people are uninsured or underinsured. Layoffs will mean tens of millions of people more will lose their current insurance — which will result in countless deaths and bankruptcies. Already in the last two weeks, an estimated 3.5 million people have lost their employer-sponsored insurance.
And as the pandemic grows, we are seeing more and more reports of people who have delayed treatment due to concerns about cost. In this pandemic, uninsurance will lead to deaths and more COVID-19 transmissions.
Therefore, during this crisis, Medicare must be empowered to pay all of the deductibles, co-payments and out-of-pocket healthcare expenses for the uninsured and the underinsured. No one in America who is sick, regardless of immigration status, should be afraid to seek the medical treatment they need during this national pandemic. Let me be clear: I am not proposing that we pass Medicare for All in this moment. That fight continues into the future. But, for the moment, we must act boldly to make sure everyone can get the health care they need in the coming months.

3. Use the Defense Production Act to Produce the Equipment and Testing We Need
Unbelievably, in the United States right now, doctors and nurses are unnecessarily putting their lives on the line treating people suffering from the coronavirus because they lack personal protective equipment like masks, gloves, and surgical gowns. The CDC has directed health professionals to use homemade gear like bandanas or scarves and some workers at the VA are being told to re-use one surgical mask for a week at a time. HHS estimated that our country needs 3.5 billion masks in response to this crisis.
President Trump has utilized the Defense Production Act thousands of times for the military and for enforcement of his immigration policies, yet he has resisted using its power to save lives during the pandemic. That is unacceptable. We must immediately and forcefully use the Defense Production Act to direct the production of all of the personal protective equipment, ventilators and other medical supplies needed.
We must also utilize this power to produce antibody tests so we can begin figuring out who has already contracted the virus and has developed some immunity to COVID-19.
In addition, OSHA must adopt a strong emergency standard to protect health care workers, patients, and the public during this crisis. We must crack down aggressively on price gougers and hoarders, and use any means necessary to secure supplies.

4. Make Sure No One Goes Hungry
Even before this crisis hit, one in every seven kids in America was going hungry and nearly 5.5 million seniors in our country struggled with hunger. Already in this crisis we see lines at food banks and growing concern that our most vulnerable communities and those recently unemployed may struggle to feed their families.
As communities face record levels of food insecurity, we must increase SNAP benefits, expand the WIC program for pregnant mothers, infants, and children, double funding for the Emergency Food Program (TEFAP) to ensure food banks have food to distribute, and expand Meals on Wheels and School Meals programs. When necessary, we must also develop new approaches to deliver food to vulnerable populations — including door-to-door drop offs.

5. Provide Emergency Aid to States and Cities
Even as state and local employees like police officers, firefighters and paramedics work on the front lines of this pandemic, states and cities that pay their salaries are facing enormous budgetary pressures.
Congress must provide $600 billion in direct fiscal aid to states and cities to ensure they have the personnel and funding necessary to respond to this crisis. In addition, the Federal Reserve must establish programs to provide direct fiscal support and budgetary relief to states and municipalities.

6. Suspend Monthly Payments
Even before this crisis, half of the people in our country were living paycheck to paycheck. In America today, over 18 million families are paying more than 50 percent of their income on housing. Now, with growing unemployment, families are facing financial ruin if we do not act quickly and boldly.
That’s why we must suspend monthly expenses like rent, mortgages, medical debt and consumer debt collection for 4 months. We must cancel all student loan payments for the duration of this crisis, and place an immediate moratorium on evictions, foreclosures, and utility shut-offs.

“These are the times that try men’s souls; the summer soldier and the sunshine patriot will, in this crisis, shrink from the service of his country; but he that stands it now, deserves the love and thanks of man and woman. Tyranny, like hell, is not easily conquered; yet we have this consolation with us, that the harder the conflict, the more glorious the triumph.”           ——Thomas Paine, early American Socialist

Add your name to say you support these ideas to support the working people of this country during the coronavirus crisis.